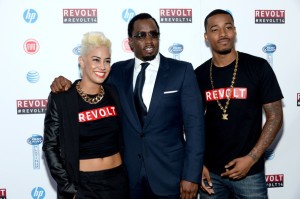 dedication pays off. At only 25, Damage has made a name for himself in the music industry by working with some of the biggest names in the business such as Meek Mill, Wiz Khalifa, and currently Diddy.

Born and raised here in Philadelphia, DJ Damage aka Abdul-Quddas Muhammad began mixing as early as 11 after realizing that pursuing rapping like his brother was not the path for him, according to an interview by Matt Hassoun. By the time Damage reached High School, he was reported to have already begun generating buzz and gaining attention from those in his city. Majoring in Broadcasting Telecommunications and Mass Media, Damage headed to college where he joined Temple’s WHIP radio station and from there, the possibilities were endless.

Djing for some of Philly’s top radio stations, making appearances on 106 and Park, and to his current hosting job on Revolt TV, Damage has definitely accomplished a lot in such a short amount of time. Getting the opportunity to reach out to Damage, I was able to gain a new perspective on how he handles his new fame. He agrees that most people lose themselves in the industry but he manages to stay grounded stating, “It is very easy to get lost. There are tons of factors that contribute to it. First factor is not truly knowing ones self. To be an entertainer, you must know what you stand for or you will fall for anything. It’s the fast lane and it is full of material poisons. I stay grounded because I stick to what makes me “me”. I refuse to compromise my integrity for fame. I am also aware that everything can be gone tomorrow and it humbles me”. Damage is not only humbled, but he also does not pretend as if the transition from radio to hosting came naturally to him. “It was a pretty good transition. I have live experience, which helps with live television. However, I did have difficulty reading on camera. It was a great learning process switching lanes.”

Damage admits that as a student of broadcast media, he always wanted to transition into being in front of the camera. Being in front of the camera however changes everything for a person. With the new fame, comes a new image that a person must uphold depending on their craft. Damage gives some insight on his opinion of fame and friendship stating, “In entertainment you grow out of old friends. I am from the inner city and some of my old friends are not necessarily good for my image. People change around you when they start viewing you in a bigger light. They sometimes become opportunist, and that can be troublesome. However, with being an entertainer, you gain new friends that understand the lifestyle and can relate.”

In a tweet on January 25, 2015, DJ Damage (@TheRealDJDamage) offers encouragement to those wanting more out of life, writing, “sometimes all you need is consistency. Find something you love to do and stick to it. I mean that’s what I did. Followed my dream”.

This site uses Akismet to reduce spam. Learn how your comment data is processed.